Maintainer to Exhibit at CONEXPO & NTEA

The trade show season gets fully underway during the first week of March, as Maintainer will display at CONEXPO-CON/AGG and The Work Truck Show

Maintainer will be at Booth # 4090 at CONEXPO, which runs March 4-8 at the Las Vegas Convention Center in Las Vegas, NV. The Maintainer booth will feature five new Maintainer bodies, including a Signature Series 4 Lube Truck and a service truck sporting Maintainer’s newest crane, with a 90,000 ft*lb crane rating. CONEXPO is one of the largest trade shows geared toward the Construction industry, and this year registrations are on pace for a record attendance. Come see us at CONEXPO!

This year also marks the 50th anniversary of the National Truck Equipment Association (NTEA). NTEA sponsors and will be celebrating at The Work Truck Show, the annual industry trade show this year held at the Indiana Convention Center in Indianapolis, IN, March 5-7. Maintainer will be exhibiting at Booth 3106. Come check out our newest booth display and learn about the latest innovations produced by Maintainer! 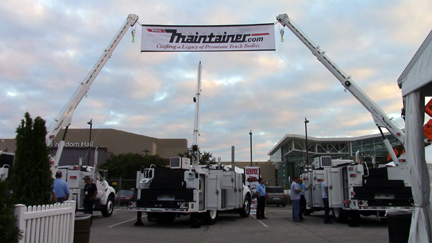